How to create VSIX package for ProjectTemplate

If you often have projects which setup is pretty much the same you might consider creating ProjectTemplate for Visual Studio.
It speeds up development for the project setup, adding references, default configuration .config, content files...

Before you start make sure that you have installed Microsoft Visual Studio 2013 SDK (http://www.microsoft.com/en-us/download/details.aspx?id=40758) and Nuget Package Explorer (http://npe.codeplex.com/)

I also attached a small dummy project just to help understanding what is written in this article.

Skipping to hands on code is always more helpful and faster for me to, so if you are bored by reading, download the attached .7zfile and explore it.

Now for those who prefer reading :)

Create a new project of C# Project Template. You will find it in Visual C# > Extensibility section. 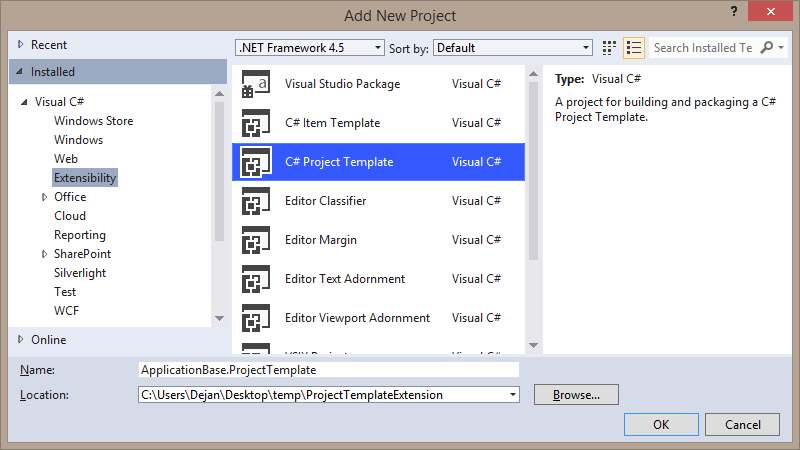 Project will have included Class1.cs file. Feel free to rename it, but make sure you replace the filename in .vstemplate and .csproj
In the sample attached I renamed it to MyObject.
If you open the file you will see that it is a bit different than the class files you usually add to your projects. These values, especially namespace will be changed when you create a new project using this template.
You will notice that there is .ico file included in the ProjectTemplate project. It is an icon that will appear in the project templates list after you install the template and start creating new project. You can replace it with the icon you prefer for you project template.
Project template is now pretty much done. 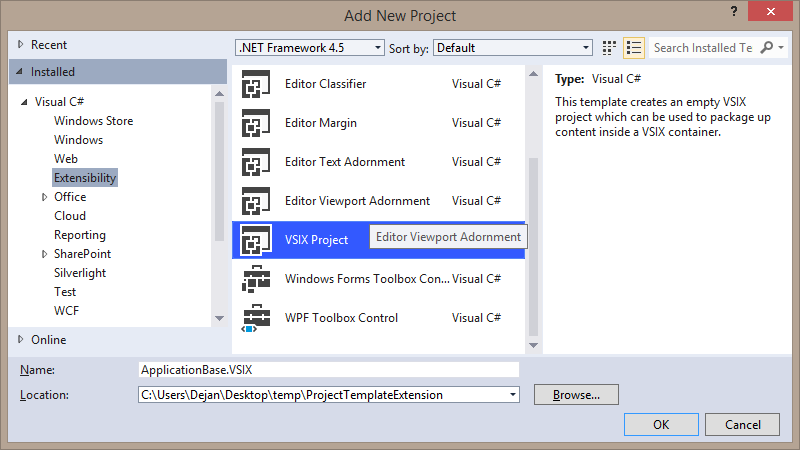 Newly created project will have source.extension.vsixmanifest included which contains main settings for the VSIX package. If you double click it you will get an UI for setting the values, but for fine tuning you will have to switch to XML code view.

The UI consists of 4 sections:

Will stick to Assets section for now. One thing you need to include here is the project of C# Project Template type we previously created.
You project template is now ready and after building VSIX project you will have .vsix file created in bin folder of VSIX project.
File .vsix is nothing more than a zip archive, and if you open it with any archive manager like 7zip you will see the content of the package which contains project template as a zip archive inside it.

You can execute VSIX file from bin folder and install the project template now to check if everything is working properly. After installing, if you have any Visual Studio instances running, close them and start Visual Studio again.

Try to create new project and you should be able to see your project type in the list. 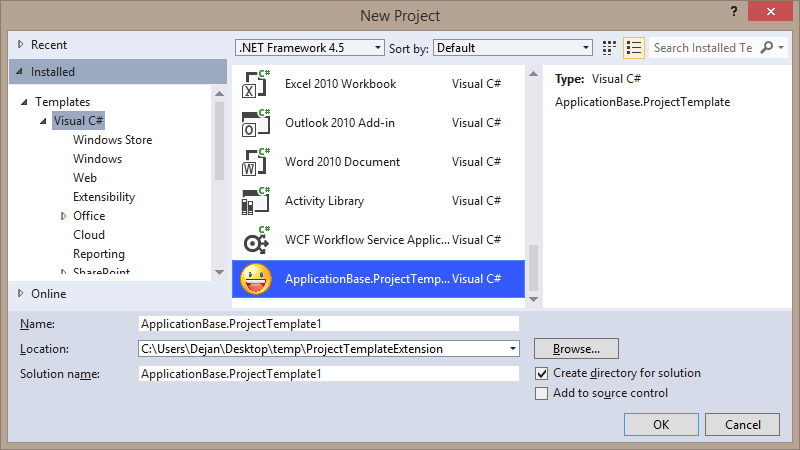 Usually for your project you will need to reference some custom library.
Reference library can be some library from either

Creating non GAC reference can be done only through NuGet package installer which needs to be invoked from VSIX during installation process.
Either reference is nuget package from nuget.org repository or localy created nuget package, you need to include reference to NuGet wizard to source.extension.vsixmanifest in VSX project.

If we need to reference local assembly, we need to create NuGet package locally first. For that we need to install Nuget Package Explorer first.
For the testing purposes we'll create a class library assembly with an interface which will be implemented in the ProjectTemplate class.

Inherit this class in MyObject class in ProjectTemplate project to make sure that referencing is working after you install template and create new project of it's type.

For this we'll need a reference to class library. To keep the reference in the project template, we need to create a nuget package using NuGet Package Explorer.

After creating .nupkg create folder packages and store .nupkg file inside it. Change property "Build Action" to True and "Include in VSIX" to True in properties pane. in ProjectTemplate change file .vstemplate file to point to package from VSIX project.
This is important because without setting these values to True, package will not be included in .vsix after compiling 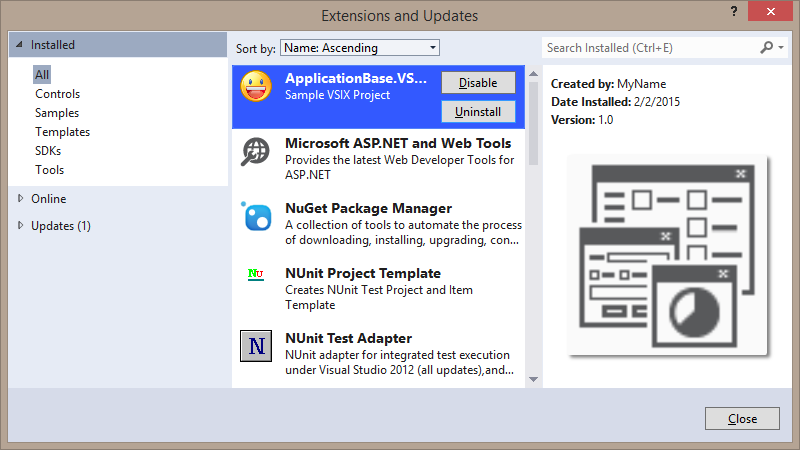