How to have a REST with Azure serverless functions

Serverless model is present on the cloud platform for quite some time, but it took time for companies to realize the benefits and cost reduction as well as security and policy concerns to completely rely and switch their infrastructure to the cloud.

Although from financial point of view and complexity of maintained and other aspects serverless looks like an ideal model to build your infrastructure on, it also has it's own down sides. Before we dig into the subject of creating and deploying your REST services to Azure serverless model, let's list some of the benefits and downsides of relying on serverless or often referred as FaaS (Function as a Service) cloud computing model to help you decide whether you want to read the rest of the article or not :)

In my opinion it is not a major issue, because companies also have their infrastructure in more than one cloud platform because of the specific requirements. You may wan to use services from more vendors, for example Google Maps or Google translate services and at the same time benefit from Azure Office365 and Azure AD tight integration in your company.

Latest release of Azure FuntionApp V2 does not support direct model binding. It is an existing issue which does not exist with V1 and this issue is referenced in opened issue/bug in Github repository https://github.com/Azure/azure-functions-host/issues/3370

To summarize, if you are fine sticking with specific cloud provider with your application, serverless is definitely something you should consider.

Both Visual Studio2017 and Visual Studio 2019 IDE come with build in FunctionApp project templates. It makes it not so different that building any other project in Visual Studio.

I am currently using Visual Studio 2019 preview 2 and Azure FunctionApp template is available from the start screen. 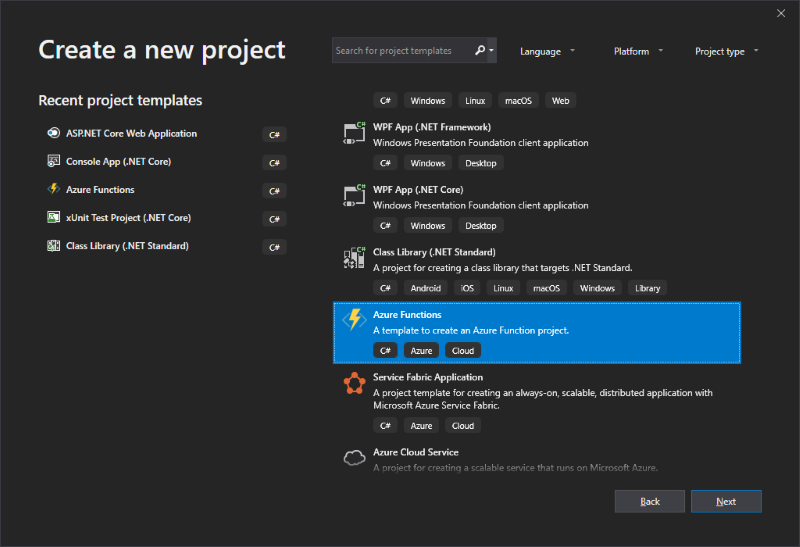 Since FunctionApp is not state-full component as it is alive only when it is invoked (especially when used with Pay-per-use pricing model), it makes it perfect candidate to build your REST services on top of it.

FunctionApp is not typical MVC project, so many luxuries that you would have in typical WebAPI application are not there. One of them is out of the box model validation. Lucky for us, we can still reference System.ComponentModel.DataAnnotations namespace and use custom extension methods to validate the model passed to our REST service endpoint.

Since we want to build REST facade it is clear that our Azure FunctionApp Function will be invoked via HTTP, so for that reason we need to create function that is invoked via Http trigger. Visual studio already has a template for functions with different trigger methods, so we are just going to do it from the new function menu in FunctionApp project. 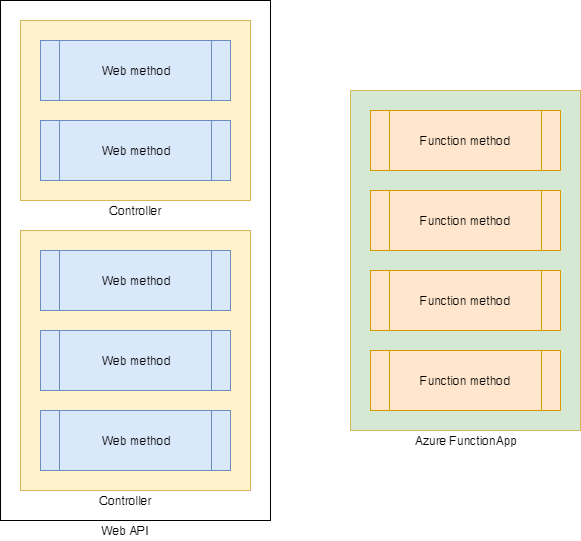 With this analogy in mind, let's see how would our Azure REST API look like.

Authorization is specifict to Azure functions and we can skip it for now as we only want to have the REST facade for now and we'll deal with he security later on in the article.

HTTP method and route arguments of the attribute constructor are what is important to us in order to have our FunctionApp endpoint respond in REST way to the invokers. Since REST relies on HTTP method, same route has to have different handlers for different HTTP methods. For that reason we have same route value for all functions inside our PersonsService class.

Decision which method we'll be triggered depends on HTTP method which is exactly what we wanted in the first place. With this configuration in place we can run the FunctionApp and see how it works.

Debugging and testing with POSTMAN

Even if you do not have Azure account, you can still test you FunctionApp on your local, as Visual Studio is shipped with Microsoft Azure emulator to allow debugging with limited Azure environment on your local machine. 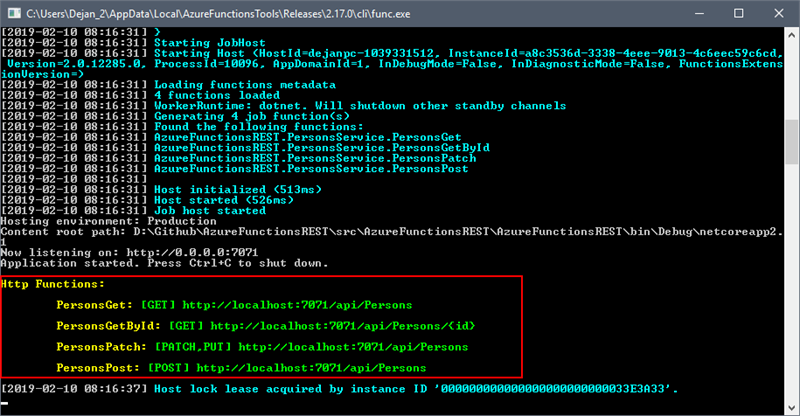 At the end of trace in the console, emulator will list all function endpoints along with parameters and HTTP methods they are configured to accept. It is obvious that we have REST facade with our FunctionApp running on the localhost. We can simply now use POSTMAN or any other tool and send requests to our endpoints and use breakpoints in the function methods to confirm the method invocation. 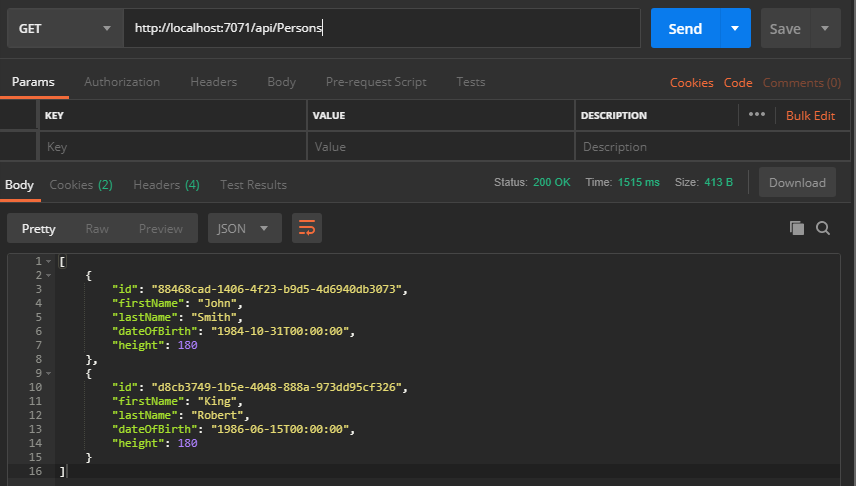 Most of the time your endpoints will not be accesible for public but rather to only authenticated clients. Authentication method of the function is declared in the constructor of HttpTrigger attribute. There are two basic models for Azure functions endpoint authentication.

When you create your FunctionApp in Azure, you will get set of secret keys associated to FunctionApp. You can supply this key in the query of in header of your request to function endpoint. Since I already have AuthorizationLevel.Function set in the code in above snippet, once application is deployed to Azure, I can use it in postman to make the calls.

If you navigate to your FunctionApp in Azure portal and you select specific function, you can get the URL along with the secret key you need to invoke the function.

You noticed that there are 3 key options you can use

Now to test the authentication of the endpoint, let's first see is it still opened for public. We can simply check that by trying to call it from the POSTMAN without the secret key.

And now test with supplied key in the request URL

As for authentication using AzureAD or other providers like Facebook, Google or Twitter that come out of the box as a setting on FunctionApp level in Azure dashboard 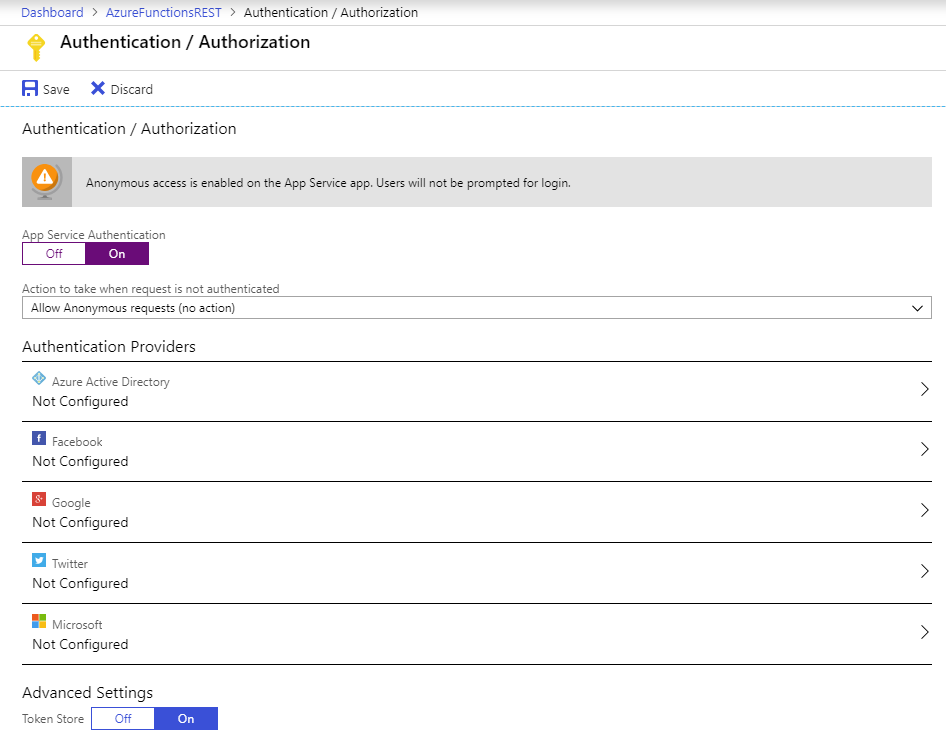 You can pretty easy rely on any of the supported external authentication providers to authenticate your calls to FunctionApp endpoints.

Now to summarize. Relying on serverless cloud model is great and cost effective but only if you are ready to pay the price of vendor lock-in. I am not saying that moving away from one cloud provider to another is not possible, but serverless model is so tight coupled with specific cloud provider. One reason is certainly getting the best from the cloud platform, but another reason is that cloud providers want you to stick with them for a long time.

If you are ready to have commitment to certain cloud provider, then serverless is something you should definitely think about as it can significantly reduce the amount of work and money.