Image from Pexels by Pixabay

Another way of seeding data in EF Core

Not so while ago I wrote an article on Seeding data with Entity Framework Core using migrations. This approach relies on EF Core migrations to ensure seeding of specific data is done only once using __EFMigrationsHistory table to track structural migrations as well as data seeding migrations.

In large number of cases this approach works just fine and you do not need to do any adjustments or add any additional tables, just use migrations mechanism out of the box. However in some corner case, when you are changing the table structure of the tables which are also involved in seeding process you may end up in compilation errors because you are referencing table columns in your seeding which may not exist anymore.

Another type of error that may occur due to table structure changes is when you try to execute migrations from the scratch, to an empty database. This does not cause compilation error, but rather runtime because your migration that seeds may try to set some columns that may be created in the table in the migration that executes later. Unfortunately, you cannot skip some columns when mapping entities to tables and this is where this approach becomes a bit hard to maintain.

Another approach which I also used to overcome these issues is using good old plain SQL script files to seed the data. This allows you to separate completely data structure setup (migrations) and data seeding. This will ensure that all structural changes are performed before any data is seeded.

On a good side you have EF Core migrations mechanism making sure your seeding migration executes only once by adding a record to __EFMigrationsHistory table.

I'll use a simple solution which you can find on Github to demonstrate SQL scripts approach.

To avoid unnecessary complexity I did not include application layer (with services) and data layer (repositories), but you should consider adding these projects to your real world application solution

If you check the solution, you will see that comparing to the previously mentioned approach, migration classes and SQL scripts are separated completely into separate folders under data infrastructure project. 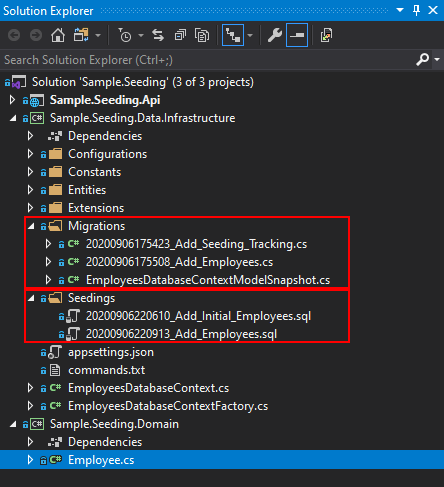 What we are loosing with this approach is out of the box mechanism to take care of single seeding script execution which we have using migrations. Luckily this is not hard to replicate and we'll go through it in the rest of the article.

EF Core migration keeps tracking of executed migrations in __EFMigrationsHistory by adding a new record for every migration file that was successfully executed. This is quite straight forward and it can be easily replicated.

I choose to name the table for seeding history track __SeedingHistory. It is created by simply using a migration in EF Core like any other table, but I added some small differences in dbContext to differentiate it from other entities that are used for application logic, but let's start with simple things first.

The sample application which is attached to this article as a Github repository is keeping records of the employees, Nothing complicated, just basic things.

To have things clean and separated, instead of having configuration in the dbContext, I use a separate configuration class to define keys, indexes and restrictions for this entity model.

Now that we have our application data that is taking care of the actual domain application is attempting to solve, we can add entities that are not directly related to domain and that entity is the one representing the record of seeding SQL script executed during seeding.

SeedingEntry entity is not sitting alongside Employee entity model. This is because seeding has nothing to do with application logic, but rather with bootstrap of the underlying data infrastructure

We only need to store the executed script name, but you can also add additional info like date time stamp of auto increment id. For the simplicity I only store name of the script file which is the only essential info to make sure script is executed only once.

Entities need to be added to our DbConext class, but there is a slight difference how we are adding properties for these two entity collections.

Since we do not care about the seeding outside of the infrastructure layers, no real reason to expose it outside and therefore it is internal property unlike public for domain entity models.

Before we create our tables with migrations we need to implement IDesignTimeDbContextFactory<EmployeesDatabaseContext> to be able to run migrations from the EF Core CLI global tool.

We also need to include appsettings.json to the infrastructure level to supply the connection string which will be used when migrations are run from the CLI command line

EF Core 3.1 migrations are moved to CLI global tool which you need to install first. You can easily do it from Windows cmd/PowerShell or on Linux from the bash using the following command "dotnet tool install dotnet-ef --global --ignore-failed-sources"

Now the fun part. We need to execute our scripts which will seed the data.

The scripts can be easily supplied as embedded files which means they will be bundled inside our complied dll file. In .NET Core this can be simply done by adding the file to the project and then registering it as embedded resource in .csproj file.

You can note that filenames start with date and time in yyyyMMddHHmmss format. This is the convention that I used to know the order in which files need to execute.

To make it easy to use I made seeding as an extension method IApplicationBuilder so it can be invoked from the ASP.NET Core pipeline easily.

To ensure only executed scripts are tracked as records in __SeedingHistory table, both script execution and storing of the seeding execution record need to run inside the same transaction. This ensures that if script or seed tracking fails, both are rolled back and seeding is stopped.

In case you need to stop the seeding from the SQL script itself you can use RAISERROR (Transact-SQL) https://docs.microsoft.com/en-us/sql/t-sql/language-elements/raiserror-transact-sql?view=sql-server-ver15 if you are using Microsoft SQL Server

Wiring it to ASP.NET Core project

Since both DbContext registration and seeding have their extension methods, it is pretty straight forward to add them to the ASP.NET Core dependency injection and pipeline. Now this should not be invoked directly from the API level, but for the sake of simplicity we will application and data/repository layer.

All the changes need to be done in the Startup.cs. Basically we just need to invoke our extension methods

Once we have dependency injection and the pipeline extension methods invocation in place, we can just get the data from the database

Now once we run the project and try to access our employees endpoint, we will get all the data inserted by the seeding scripts

Seeding using SQL scripts does not necessary need to execute only INSERT commands. You can use scripts to do conditional INSERT/UPDATE/DELETE based on the present data on different environments

Global tool code for creating seedig SQL script files and adding it as embedded resource to your .csproj if quite simple as it has only one command which is add.

This command is responsible for two major operations:

As a nice addition it uses a sample Template.sql file which behaves similar to NotImplementedException empty method body that Visual Studio generates.

This forces you to alter the file with your logic. If you by accident hit F5 and run the project it will break by throwing and SQL exception when it tries to execute seeding file body.

More on this along with functional code you can find on Github https://github.com/dejanstojanovic/sample-seeding-sql/tree/master/Sample.Seeding.Tool.